​Steve Cottrell, The Lenores, and Don Scott are local Boulder City residents. Steve started out performing in Ghirardelli Square in San Francisco in the 60's and has been performing in various venues ever since. He has been a favorite for Boulder City fundraisers and past Chautauquas. The Lenores are singers and acoustical guitarists as well and have played at many local venues.  Don is an energetic and accomplished performer. He is a principle performer for Country Fever Show at Golden Nugget, and has played guitar for Kenny Rogers, base for Wayne Newton, and sang in a backup choir for Barbra Streisand. He is currently music director for Bethany Baptist Church in Boulder City. 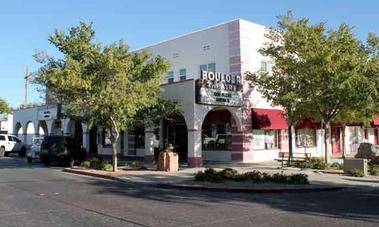 About the Historic Boulder Theatre

Amy and Desi Arnaz, Jr. purchased the Boulder Theatre in 1997 and brought it back to life after being on the brink of extinction.

Dr. Doug Mishler holds a PhD in History and has years of theatrical training, as well as 20 years teaching history and 15 years directing and acting, Doug is nationally renowned for bringing history to vibrant life, and he has performed over 600 one-man shows in the last 25 years at educational venues, theaters, museums, corporate meetings as well as motivational seminars, bringing to life a wide variety of "real" historical characters, who cover all aspects of our history: politics, business, the military, the environment, science, as well as entertainment and art; and span every era from the 1600s to the 1980s! No matter which character is experienced, every one of them helps us understand our culture and our humanity.

Chautauqua began as an educational gathering, originating as an American movement in the late 1800s, providing public lectures, religious programs and concerts during the summer months. It was an adult education movement in the United States, highly popular in the late 19th and early 20th centuries. Chautauqua assemblies expanded and spread throughout rural America until the mid-1920s. The Chautauqua brought entertainment and culture for the whole community, with speakers, teachers, musicians, showmen, preachers, and specialists of the day. Former U.S. President Theodore Roosevelt was quoted as saying that Chautauqua is "the most American thing in America."

Chautauqua in Boulder City, Nevada, began in 1992, and continues today as an exploration and enrichment of life through three pillars of programming:  education, cultural arts, and recreation.

​Boulder City Chautauqua is a Non-Profit 501 (c)(3) Organization. All donations are  tax deductible to the extent permissible under law.

Although this year's Chautauqua will be held in a different venue, our 20-year relationship with Desi Arnaz Jr. and the Historic Boulder Theatre continues.

Built in 1933 by Fox Theatres, the Historic Boulder Theatre was the heartbeat of Boulder City for nearly 60 years. Because it was the only air-conditioned building in town, workers from Hoover Dam would pay $.25 for a movie ticket just so they could sleep for a few hours in the cool theatre to escape the scorching heat in Black Canyon.

As the years passed, hundreds of movies were shown on the screen, Will Rogers performed on a small stage in front of the screen, bands played, speeches were given and many couples shared their first kiss during a movie.

Carol Starre-Kmiecik has been performing on stage for over 35 years. She has a Bachelor's Degree in Speech and Theatre Arts from Baldwin-Wallace College and studied improvisational Theatre at Chicago's Second City for two years. She has appeared in over 60 plays, several films, television shows and commercials and has been a spokesperson at hundreds of trade shows, conventions, and seminars throughout the country. She has worked as a makeup artist, taught children's theatre classes and has directed plays. She has portrayed historical characters for schools, libraries, historical societies, women's organizations, senior citizens groups, churches, synagogues, theatres, social service organizations, literary groups, scouting troops and has done Civil War re-enactments. A